Bettering the world, one ad-free blog at a time - plus, news!

I removed the ads from my blog today. I don't know why I put them there in the first place; I suppose it was for the same reason anyone puts ads on anything - money - but really it feels like I put them there because it looked like they were needed. I realize now that they were useless, especially since this spent a while as a private blog, but perhaps more to the point, they were wrong.

I pay nothing for this blog, or at least I don't spend any money on it. I don't owe anyone anything for the privilege of writing here. There's nothing reliable or even particularly valuable about any of my posts. I don't write anything I don't want to write; more to the point, anything I do write is written for the sake of writing. And so it feels wrong to ask for money for these thoughts, wrong to make anyone who reads the things I write to look at an ad so I can make money for what is essentially free.

So the ads are gone. And my little corner of the world feels like a slightly better place for it.
In other news: remember that Timed Standby app? Yeah, that one. You might be wondering what happened to it. If you are, I wouldn't blame you. When you make a promise like that and then act like it never happened for a year, people tend to wonder. But at last, relief from the anguish of uncertainty: what happened is that I finally finished it, it was fully functional, and then I realized it was all wrong.

In that last blog post, you might remember I had a list of deficiencies with existing timed-power-state-action utilities. One deficiency I forgot is that almost all of them are hideous. Horrendously ugly. Like, Windows-98-time-warp ugly. All Windows Forms-y and completely out of touch with today's UI standards. And I realized after I finished that my utility did everything I wanted it to, it was just as hideous as all of them, and therefore no better. No, really: 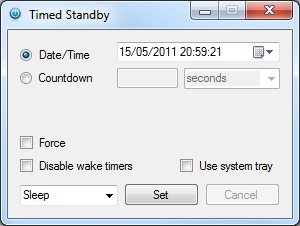 See what I mean? Hello, 1995. Ugly little icon and everything.

So I promptly gave up on it and forgot about it for nearly a year, until my friend introduced me to WPF, which immediately moved me past the only remaining problem with my app. And reintroduced all of the others, primarily that not-working thing, since I had to rewrite almost all of it from scratch.

The good news is that I've almost finished fiddling with the UI, getting it just right, and once I've done that I'll actually make the damn thing do something useful again. But at least for now, it's pretty, instead of repulsive. Trust me. You'll see it when it's done.
Posted by ionothanus at Sunday, May 15, 2011